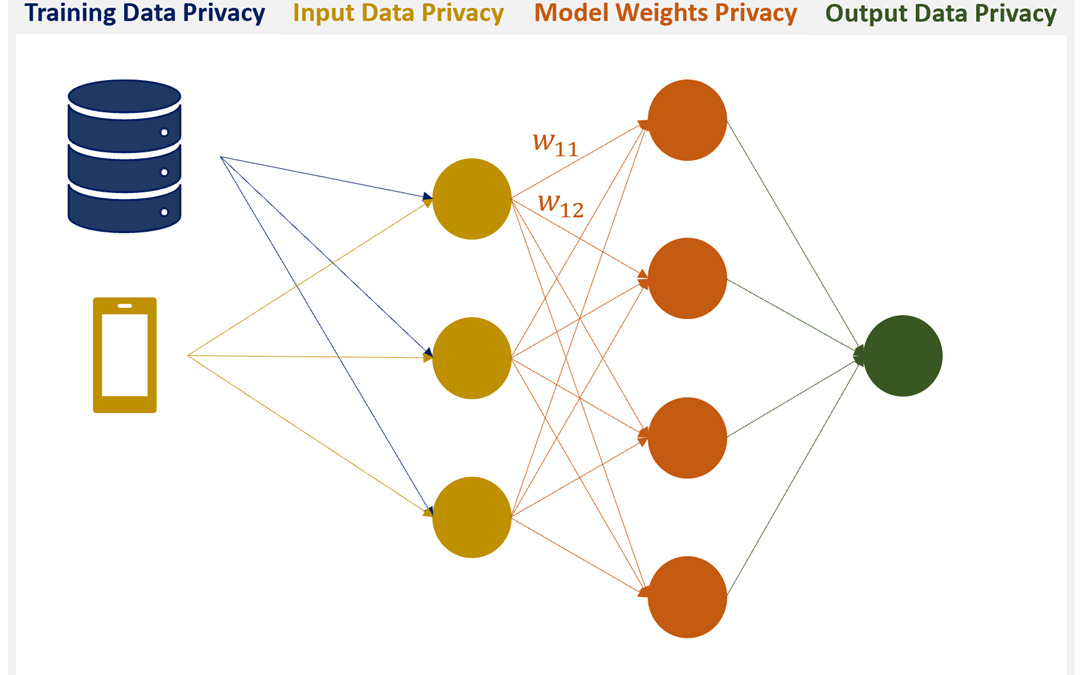 Data privacy has been called “the most important issue in the next decade,” and has taken center stage thanks to legislation like the European Union’s General Data Protection Regulation (GDPR) and the California Consumer Privacy Act (CCPA). Companies, developers, and researchers are scrambling to keep up with the requirements. In particular, “Privacy by Design” is integral to the GDPR and will likely only gain in popularity this decade. When using privacy preserving techniques, legislation suddenly becomes less daunting, as does ensuring data security which is central to maintaining user trust.

During our research, we identified four pillars of privacy-preserving machine learning. These are:

While 1–3 deal with protecting data creators, 4 is meant to protect the model creator.

While it may be slightly more difficult to gather information about training data and model weights than it is from plaintext (the technical term for unencrypted) input and output data, recent research has demonstrated that reconstructing training data and reverse-engineering models is not as huge challenge as one would hope.

In [1], Carlini and Wagner calculate just how quickly generative sequence models (e.g., character language models) can memorize rare information within a training set. Carlini and Wagner train a character language model on the Penn Treebank with a “secret” inserted into it once: “the random number is ooooooooo” where ooooooooo is a meant to be a (fake) social security number. They show how the exposure of a secret which they hide within their copy of the Penn Treebank Dataset (PTD). They train a character language model on 5% of the PTD and calculate the network’s amount of memorization. Memorization peaks when the test set loss is lowest. This coincides with peak exposure of the secret.

So how can we quantify how likely it is that a secret can be reverse-engineered from model outputs? [1] develops a metric known as exposure:

Given a canary s[r], a model with parameters θ, and the randomness space R, the exposure s[r] is

and the rank is the index at which the true secret (or canary) is among all possible secrets given the model’s perplexity for the inputs. The smaller the index, the greater the likelihood that the sequence appears in the training data, so the goal is to minimize the exposure of a secret, which is something that Carlini and Wagner. achieve by using differentially private gradient descent (see Solutions below).

Another exposure metric is presented in [2], in which the authors calculate how much information can be leaked from a latent representation of private data sent over an insecure channel. While this paper falls more into the category of input data privacy analysis, it’s still worth looking at the metric proposed to compare it with the one presented in [1]. In fact, they propose two privacy metrics. One for demographic variables such as sentiment analysis and blog post topic classification, and one for named entities such as news topic classification. Their privacy metrics are:

When looking at the evidence, it’s important to keep in mind that this sub-field of AI (privacy-preserving AI) is brand-spanking new, so there are likely a lot of potential exploits that either have not been analyzed or even haven’t been thought of yet.

There are two main proposed solutions for the problem of training data memorization which not only guarantee privacy, but also improve the generalizability of machine learning models:

Input user data and resulting model outputs inferred from that data should not be visible to any parties except for the user in order to comply with the four pillars of perfectly privacy-preserving AI. Preserving user data privacy is not only beneficial for the users themselves, but also for the companies processing potentially sensitive information. Privacy goes hand in hand with security. Having proper security in place means that data leaks are much less likely to occur, leading to the ideal scenario: no loss of user trust and no fines for improper data management.

This is important to ensure that private data do not:

While it is standard for data to be encrypted in transit and (if a company is responsible) at rest as well, data is vulnerable when it is decrypted for processing.

AI models can be companies’ bread and butter, many of which provide predictive capabilities to developers through APIs or, more recently, through downloadable software. Model privacy is the last of the four pillars that must be considered and is also core to both user and company interests. Companies will have little motivation to provide interesting products and spend money on improving AI capabilities if their competitors can easily copy their models (an act which is not straightforward to investigate).

Machine learning models form the core product & IP of many companies, so having a model stolen is a severe threat and can have significant negative business implications. A model can be stolen outright or can be reverse-engineered based on its outputs [14].

As can be seen from the previous sections, there is no blanket technology that will cover all privacy problems. Rather, to have perfectly privacy-preserving AI (something that both the research community and industry have yet to achieve), one must combine technologies:

Other combinations also exist, including some with alternative technologies that do not have robust mathematical guarantees yet; namely, (1) secure enclaves (e.g., Intel SGX) which allow for computations to be performed without even the system kernel having access, (2) data de-identification, and (3) data synthesis.

For now, perfectly privacy-preserving AI is still a research problem, but there are a few tools that can address some of the most urgent privacy needs.

Many thanks to Pieter Luitjens and Dr. Siavash Kazemian for their feedback on earlier drafts of this post and Professor Gerald Penn for his contributions to this work.